Dancing in the Dark, I’ve been firming up, digging deep into what lies below. The threads that weave this journey are dark blues, purples and deep red – the color of congealed blood. It’s a moody hue, but it’s flecked with glittering threads and mirrors too.

It was early July. We took an overnight voyage on the sailboat named for my sister-in-law, the Courtney Too. Courtney passed on before I had a chance to meet her. Ghosts are with us. 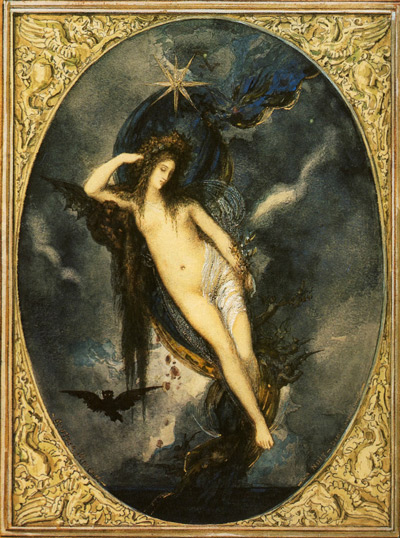 That night, I fell in love with the Lady Night. I saw her, in her glittering raiment of the night sky, as if for the very first time. We were anchored in Wharton Creek, in the Northern part of the Chesapeake where the water’s clean. Lying out on a bench in the cockpit, my body felt cool and soothed after bathing in the limpid waters of the Bay. The dark purple, velvety sky was illumined by stars and a half moon, with streaks of azure blue playing against dark, voluminous clouds. Here the Night revealed herself to me as a Goddess – dark, sparkling and unbelievably lovely. And she darkened the water below so magnificently that I came of mind of merfolk and their slippery, sensual ways. And I felt the shifting of Amaru in that same darkness, rubbing his shedding skin on rocks beneath the surface to peel it away from his enormous body.

What else lay below? Sailors, in the days before modernity, feared the kracken. A giant, octopus-like monster, enormous and terrifying. With unflinching eye, it would wrap its tentacles, sinking then devouring entire ships, leaving behind a few pieces of flotsam where men’s lives and livelihoods once lay. Leaving a void.

Was this fantasy rather a daemonic vision? A perception of the awesome powers of the sea, cast upon the subconscious fears of mere men? Alone in the open ocean, aboard the whaling ships of yore, sailors lived on the water for days, stretching into weeks, months, and years on expeditions that typically lasted two years. They worked, confined in their small vessels, under threat of stormy, thrashing seas, the burning sun and the mythic proportions of the whales they hunted. In those days, before radios and GPS, in the unbelievably empty, vast mirror of the ocean, what might the mind dredge up? Out there on the Courtney Too, just for one night, I understood the ocean as the floating world of the imagination, and the fear that might uprise from all that she hides.

Yet it occurs to me that there is power in this nightmarish vision of the kracken that might be claimed. What if we recognized that beast, and all it’s monstrous kin, as ourselves? What incredible strength and power, a strength beyond anything we ever imagined ourselves capable of, would then be ours? Yes, the monster is fierce, it’s teeth are sharp and it’s breath is foul. Yet, maybe, just perhaps, the power of the beast is one that can be transmuted. A gargantuan energy would then move through us, unleashed from deepest, darkest cavernous recesses of Soul, entrained by the calm, perfection of a quiet mind, in service of Love.

Our sailing companions told us the story of the famed English pirate, Blackbeard, and the terror he inspired in the hearts of his victims. He had a taste for the theatrical, using ploys like hanging lit fuses under his hat to enhance his fearsome appearance, adding a hellish play of light and shadow to his face and long black beard. He was a former mariner in the Royal Navy, gone rogue, who at the height of his pirating career commanded a fleet of pirate ships, regularly ransacking ships for booty and holding captives for ransom. Yet there are no accounts of him murdering his captives. Rather it seems he preferred to weaken the minds of his enemies using fear over force. His final battle ended with his severed head the prize dangling from the bowsprit of the sloop Jane, the vessel of the force that subdued him. He has been heavily romanticized ever since.

Why do we love pirates? Perhaps it is that, in our mythic reckoning, we admire those that dare wield a force we all possess. Blackbeard used his dark theater and violence to amass personal wealth. But what of its complement, the Dark force whose service it is to provide balance to the Light? It is within us too, the same darkness that holds the star-scattered night and Mother Moon, relieving and refreshing life after the heat and exacting light of day.

Earlier that evening on the Courtney Too, we had watched a storm come in. Anchored in the creek, the darkened line of clouds approached, moving quickly. As the edge of the shadow came upon us we ran to batten the hatches and gather up all that we wished to remain dry as the first rain drops fell. Then it was overhead, thick storm clouds and a furious rain, as we huddled under the sunshade of the cockpit, doused with the splashed blessing of the deluge.

It was Kali’s weather. But her dance this time was just a tango. It’s drama passed quickly, refreshing the air, renewing all around and within us. Cleansing the day as it became the sanctified night.

Kali-ma’s been with me a lot lately. Her name, Kali, means black. Her wild, naked dance is the tempest that sets the world on fire, destroying it, over and over again. She wears severed human heads, dripping with blood, as her necklace, her belt is severed arms; she wields a curved knife in one of her four arms and a freshly severed head in another. The vision is completed by her lolling, protruding tongue, long, dark hair and the moon above. I try to let her in, without domesticating her wildness.

The famed Hindu Swami, Vivekananda, was reverently devoted to Mother Kali. “Her curse is blessing,” was his frequent refrain.1 His disciple, Sister Nivedita, recounting one of his discourses writes, “And as he spoke, the underlying egoism of worship that is devoted to the kind God, to Providence, the consoling Divinity, without a heart for God in the earthquake, or God in the volcano, overwhelmed the listener…and one realised the infinitely greater boldness and truth of the teaching that God manifests through evil as well as through good.”2

Through these words, the power of that holy Darkness begins to crack me open, dissolving the boundary of myself that insists that all must be good and nice for it to be well. Bile floods my stomach. Rising from the depths of my body, I feel a rumble, like Kali’s terrifying footsteps approaching, shaking the earth itself. And that rumble, becomes a Roar.

Rebecca “Firehorse” Snyder was an acupuncturist and healing artist with over 20 years experience, skilled in bodywork, mindfulness practice, and movement. Holding numerous certifications, she was most grateful for her five year apprenticeship in Tai Chi Chuan/ Qi Gong with Master Tai Peter Hom of New Orleans. Rebecca held a BA in Asian Religions and Art History from New York University.

A long time spiritual seeker, Rebecca studied and grew her spiritual path through the guiding light of many wonderful teachers and the study of numerous spiritual traditions, including a study abroad in Nepal with Tibetan Buddhism at age 20. Dance, music and ceremony held important places in her personal healing journey and continue to be treasured vehicles to express a passionate reverence for life by all those who were touched by the incredible fire that she was. Rebecca finally found her spiritual home in the Pachakuti Mesa Tradition of Cross-Cultural Shamanism, under the tutelage of don Oscar Miro-Quesada. She passed away peacefully in her home on May 4th, 2018, surrounded by family and friends.

We are so grateful to have her continued wisdom and presence here through her beautiful writings.

PrevPrevious postAyni: Moving from Doing to Being
Next PostThe Gathering of the MesasNext
Back to Writer's Forum